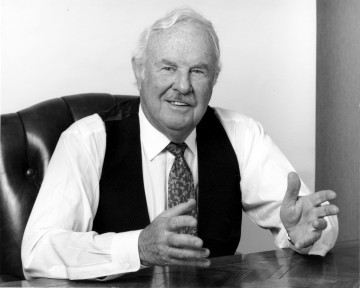 Born in Connecticut in 1919, George L. Graziadio Jr. was the grandson of immigrants. His maternal grandparents hailed from Ireland and worked in the woolen mills of the Connecticut Valley. Graziadio’s paternal grandparents came from Italy and found work in New York as fruit peddlers before settling in Manchester, Conn., to run a small grocery store that the family lived above.

From a young age, Graziadio’s parents emphasized the importance of helping others. This was a sacrifice, yet valuable lesson at the time. The nation was in the throes of the Great Depression, and most were in need. The family eventually got through these hard times, as so many others did. The Graziadios did it by raising chickens. His father, George Sr., soon found work in real estate, insurance and even auctioneering, a position George Jr. was happy to help his father with any way he could.

In the summer of 1939, Graziadio bought an old Model-A Ford for $68 and traveled with a friend to California. Their plan was to return to Connecticut in time to start school in the fall. Soon after they arrived in California, however, Graziadio had to undergo an emergency appendectomy. He had only $20 in his pocket when he entered the hospital. Upon his release, he owed $750 in medical bills. Instead of asking his parents for help, Graziadio decided to get a job and work off his debt.

Graziadio was still working full time in California when World War II began two years later. He applied for the Air Force, but failed the physical due to poor depth perception. Instead of letting this stop him, he joined the Flight Test Division of North American Aviation, which built the Mustang Fighter Aircraft and the B-25 Bomber. At the same time, he joined the Active 20-30 Club, the American arm of an international group known as the World Council of Young Men’s Service Clubs. Graziadio ultimately became president of the international organization. It was during his time with the World Council that he learned how a company should run. Through his position, Graziadio focused on raising money, involving the public in his endeavor and ultimately impacting the community at large in the process. It was after this early success that Graziadio coined one of the phrases he would later become known for: “Today, not tomorrow.”

Graziadio obtained a real estate license after the war and soon rose from salesman to real estate developer. He started small. At first, he built a house. Then he built a duplex before moving onto apartment complexes and commercial buildings. In 1958, he formed his partnership with George Eltinge, which lasted 36 years. The “Two Georges,” as they became known, created a formidable business alliance that developed more than 100 shopping centers in 21 states.

The duo opened their first financial institution in 1962 after growing frustrated with their own bank. The Two Georges sought to build a better “business bank” for the Los Angeles business community with only $1.25 million in private investment funds. This bank, which was named Imperial Bank in 1968, ballooned to $8 billion in assets and $600 million in capital and reserves solely through internal growth and without raising additional capital. Imperial Bank merged with Comerica, the country’s largest business bank, in November 2000. The transaction was valued at more than $1.2 billion.

In addition to being a tireless entrepreneur, banker and community sponsor, Graziadio was also a generous benefactor to many worthy endeavors. These included the endowment of the Graziadio School of Business and Management at Pepperdine University in Malibu and the George L. Graziadio Center for Italian Studies at California State University Long Beach (CSULB).

In April 2002, Graziadio received the prestigious Horatio Alger Award in Washington, D.C., an honor that’s been bestowed on other great Americans like President Dwight D. Eisenhower, Secretary of State Colin Powell, Senator Robert Dole and Oprah Winfrey. He has also received many other honors, including the Ellis Island Medal of Freedom, the Grande Ufficiale Award in the Order of Merit of the Republic of Italy, the Americanism Award, the Good Scout Award from the Boy Scouts of America; the Eddy Award from the Los Angeles Economic Development Agency, the President’s “E” Award from the U.S. Department of Commerce and the Albert Schweitzer Leadership Award from the Hugh O’Brian Youth Foundation, just to name a few.

Graziadio has also received recognition from the Provence of Puglia, Italy, the Newcomen Society, Pepperdine University, the B’nai B’rith Foundation, the National Italian American Foundation, the Center for the Partially Sighted, the Sons of Italy of America, the Muscular Dystrophy Association and the House Ear Institute. He holds a Doctor of Humane Letters from Chapman University and a Doctor of Laws Degree from Pepperdine University.

George L. Graziadio Jr. was more than a visionary business leader and philanthropist, however. He was a devoted husband, father, grandfather and tireless promoter for the welfare of others, especially the less fortunate. Graziadio often said, “The money you earn feeds your family, the money you give away feeds your soul.” He loved his family and his many friends, and was loved by them in return. His legacy continues today through, among other things, the hard work and dedication of the Commerce Realty family of professionals.